Following the June Solstice of 2019, the Earth is vibrationally now within a two week ‘deep solar window’ through to an upcoming Solar Eclipse on July 2nd-3rd. This is a powerful, very well supported window in which to breathe deeply into our hearts, to open and anchor the next level of higher dimensional light that has been stepping up the planetary frequency to a new level of freedom of flow through the light-grids during the first three weeks of June. Through the Solstice focus, the continuous incoming Light has secured another vital step toward the interdimensional ‘Standing Wave Event’ which star family gave a clear photographic representation of at the end of the previous post, Saturn’s Return in Light.

This particular step has been fulfilled as the planetary energy flow-lines came into global cohesion of flow in mid-June, from a light-thread here and a thread there, that then became an area here, a region there, and finally now with the planet as a whole experiencing clear higher vibrational light flows through the New Earth light-grid as a unified network.  🙂

Having all the major meridians/flow-lines of the Earth open and ‘breathing’ naturally again, subtly yet profoundly affects all living beings and the human collective consciousness field around this planet…vibrating the unity and freedom that is inherent within us and all life, throughout the Earth’s energy field. Among the raft of higher effects of stabilized freedom of flow through the meridians and planetary light-grids as a Whole is that wherever there are attempts to reassert control constructs or lower vibrational holding points, the denser 3-4D grid layers are now being organically purified in a gentle ongoing frequency radiance from the Ascended 5D Earth (that already exists) through the New Earth grid, and those control constructs will continue to fade away within the coherence of the higher vibration.

There have been attempts to fracture this cohesion in certain pressure points on the planet recently, and to open passages into the Solar System from another galactic quadrant to send through reinforcements for those seeking to cling to control of the 3-4D plane; many lightships and ground crew light-anchors have worked to defuse and transmute those attempts, and will keep doing so as necessary…and star famly reaffirm that all is well, and in alignment for a ‘high beam’ transmission through the imminent Solar Eclipse, which is coming through the Galactic Central Sun.

To give a picture of this Freedom-in-Love Ignition that came into completion through the Solstice, and is settling into the Earth’s energy field now in readiness for the Solar Eclipse, star family gave some beautiful, symbolic photos, starting with the Moon on June 15th. Just a couple of days before Full Moon, clouds formed in a curved pillar below the Moon, with many beautiful faces showing through. This cloud pillar cupped the Moon, like an arm holding the Moon upward, toward a tiny cloud that appeared upper right of the Moon in the shape of a comet with a pluming tail, diving into the Moon as it was uplifted.

The ship appearing clearly in front of the clouds to the left of the Moon is the Meri’Ashar, and in the second picture, you can see a second ship (circled) in close beside the Moon; this is the Sophia, also called the White Phoenix, which radiates the eternal Mother Rose vibration from its white and rose core crystal. Above the Sophia, there’s a face (circled) reminiscent of a meerkat, symbolizing feline energies and deep loving heart energy (meer/mir in light language is the soundform of ’emerald green’, the heart chakra light vibration).

In the next frame, the cloud can be seen curving up around the Moon, as if softly cradling it in peachy rose light, forming a deep crescent or bowl of light, like a chalice in which the Moon is nestled.

Finally, the ‘Chalice of the Moon’ floated free, literally ascending as it appeared to lift from the clouds, with Jupiter below (the bright light at the bottom of the frame)…and Jupiter has been very active at the higher vibrational level with this whole uplifting process through June 2019, with star family focus groups within and around Jupiter and liberated Saturn in deep preparation now for the coming Solar Eclipse-Great Central Sun alignment, and the following partial lunar eclipse in mid-July. Everything’s moving very fast in the Light Wave’s momentum, folks! 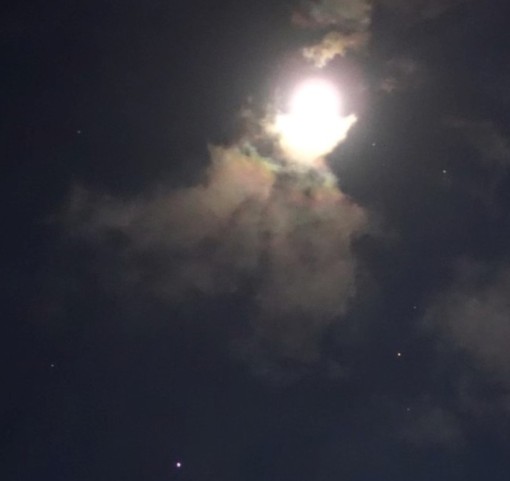 This soft yet powerful ignition waxed through the Full Moon on June 17th, then rose into the full vibrational alignment of the Solstice on June 21st. Here in the south, this Winter Sosltice was blessed with a fine, sunny day between rain storms. Our ships were busy holding the light-grids steady in various parts of the world, with the Meri’Ashar working over Syria, neutralizing attempts to open fissures across the grids. The light-anchoring reflected here in a specific connected way; I was guided to place a ‘blue butterfly’ labradorite crystal and lemon topaz on a nearby hill, and while connecting with the Meri’Ashar, Arnap (5D soul expression of my Twin Flame, Ashura) brought a little white pod ship through a triangular portal he opened in the sky directly over the crystals, and sent light through them into the Earth. In the enlargement below, you can see the triangle shape of the portal quite clearly right behind the ship. 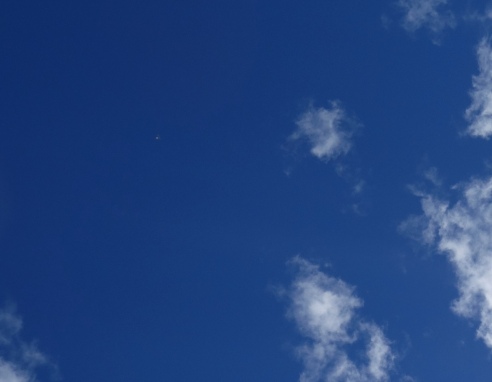 He then guided me to walk down the hill, toward a rock with an unusual curved fissure through its centre. Again, he flew his pod ship in a direct alignment over this rock, and from a higher dimensional view, a beam of white-gold light came from the ship that began to spiral as it neared the ground, flowing in a spiralling curve through the fissure in the rock, in unison with white and golden light being sent by the Meri’Ashar and Phoenix and accompanying ships into etheric fissures in a few ‘pressure points’ in the Middle East, filling them with light and smoothing them back into the harmonic flow of the high vibrational interweaving grids. 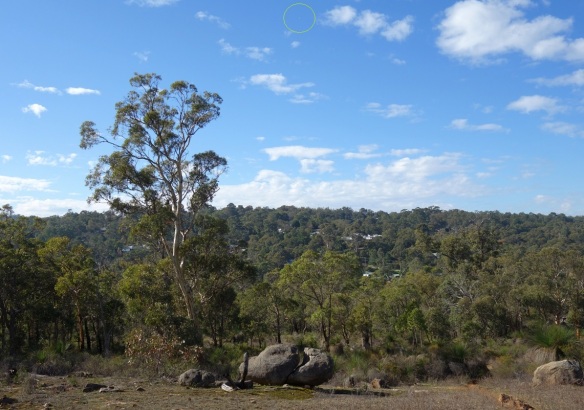 This higher flow of Freedom in Love, freedom of circulation and cohesion of the light-grids is part of, and assisted/activated by, ongoing interplanetary shifts and transformations within and around the planets, moons and asteroid companions travelling and vibrationally interacting within the Solar System. From the soul reawakening of Mars in 2018 (see Transformations July-Aug 2018 and Mars Mission Update) to the complete dismantling of the control grid around Saturn that has freed the transmission of its beautiful 6D heart light, with the rings of Saturn currently being recoded into what star family are showing as harmonic frequencies blossoming like a flower instead of being tethered as bands of constriction, to the true deep wisdom of the heart emanations of Chiron as Key to Wholeness…this all now opens the way for the higher frequencies of beautiful Uranus and its moons to radiate and be received in the Earth field.

The planet Uranus, photo by Erich Karkoshka, University of Arizona/NASA.

Uranus is vibrating 7th dimensional frequencies, amplified through it sixteen golden rings (16=1+6=7). Coming into 2019, star family called this year a bridging year, the ‘Year of the Golden Circle‘, which has multiple layers of meaning; the golden rings of Uranus are one aspect of this circle of completion and part of the bridging energy activating through the middle of this year. Uranus radiates Freedom through the integration of Grace, that comes with opening to and allowing Unconditional Loving Unity and Compassion for self and all. With Saturn transmitting its high heart light again, the soul radiance of Uranus can also be felt on Earth and in the human collective consciousness undistorted, as pure Freedom in Love&Unity rather than ego-motivated ‘free-wheeling into chaos’ or ‘free will at the expense of other people or life-forms’. This shift will come through subtly, but its effects will be deep, huge and wonderful in the collective energy field and consciousness.

June 27th is the midway point between the Solstice and the upcoming Solar Eclipse on July 2-3rd. It’s also an incredibly beautiful activation point for Freedom in Love, Freedom of the Divine Feminine in women, men and all life on Earth, as the very high Rose Light vibrations of Makarim, the Rose Planet, that flows through Messier 27 (see this post) aligns and anchors to a whole new level in the Solar System, into its natural holding points, the 27 moons of Uranus.

This activation will be flowing into specific nodes in the New Earth light-grid, and to anyone reading this, who feels called in your heart to anchor this Rose Light flow as it integrates into the lunar network of Uranus and reflects to our Moon and Earth, just open your heart, connect in Love with Gaia’s heart, and breathe in the Rose vibrations in unity with the (vision and intention of) planetary ascension blossoming as peacefully as possible within its highest trajectory. If you resonate with crystals and/or enjoy working with them, rose quartz crystals all around and within the planet are ready and willing to receive and hold the ’27’ Rose Light flow, for the highest good of all.

With much love and gratitude, rose light, peace and joy to you all, 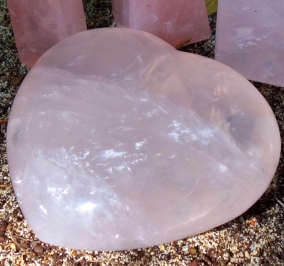