‘Loveheart’ cloud forms around the Moon, with Mars to the right, and the ship Meri’Ashar pulsing light above/between Moon & Mars, October 17th 2018.

Flowing with the heightened assistance of Aquatic Star Family groups of the ‘watery’ constellations detailed in the previous post, we’d like to share a sequence of photos of the last two weeks that connect this higher dimensional Aquatic presence with dissolving aspects of the ‘lower Mars matrix’ and its inhibiting influence on the Earth’s vibrational shift, as part of a mission implemented during the last two months focused upon transforming Mars…and continuing on strong.

Many aligned star family missions are running concurrently, interwoven in their assistance in, on and around the Earth and Solar System, and while not many details can be given at this time, our higher dimensional friends, families and soul expressions focusing their light and energy with the Earth’s Shift share these photographic representations along the way as an affirmation of their continuous supporting presence throughout this transformational process.

They also wish to remind here, that photographs of high vibrational ships, beings and phenomena are a direct transmission of energy, whether general or highly specific. So when you’re looking at a photo in which a lightship or loving being is rendering its soul-light visible (or a sequence of photos like the ones below showing a heavy energy being contained and converted to Love, transmitting a vibration of dissolving dense energies into pure love vibrations) this is also vibrating to subconsciously held ‘limiting patterns and imprints’ within our human mental, emotional, subtle and physical layers, just as it vibrates through the whole energetic/consciousness field around the Earth, reverberating though old stored imprints the message to let go, let go, let go, be free in Love.  ❤

As the overall background vibration in, on and around the Earth continues to rise (which we can feel and attune to through our peaceful hearts while keeping our energy free of the 3-4D power-play of distraction and diversion) the crystalline soul collective(s) connected with Gaia and the New Earth light-grid are also heightening and amplifying energetically, which we’ll talk about in more detail in the next post. For now, tune in with the Earth, with Gaia Soul, open lightly to her heart to heart, and align (with) the vision and inner knowing that her Crystalline Heart is radiating like an inner diamond star, sending fluid light currents through the planetary network of meridians and nodes, through the crystalline heart grid, nourishing the unified consciousness qualities that are being anchored and amplified through the crystals of the Earth, interdimensionally, and vibrating through human potential…translating into loving thoughts, feelings, words and actions wherever inner resistance has melted into trust.

The Aquatic star beings support the Earth from above and deep in the oceans, where they harmonize tectonic movements, the sea floor, and water contamination (literally harmonize, with subtle sound frequencies, ‘toning’ the planetary sound-frame). They radiate the vibration of melting hardened resistance into love; where there are harsh energies, letting go and letting them dissolve into softness. Where there are discordant tones pulled out of the inner harmonic resonance we experience as feelings of well-being, peace and love, resolving-through-dissolving into vibrant sacred geometries of sound, tonal streams flowing like the gentle refreshment of pure, sparkling water.

Our Aquatic friends gave a beautiful depiction of this ‘resolving-through-dissolving’ above a local walking trail here on October 15th, calling my attention to a small plane passing in front of a little clump of cloud in an otherwise clear sky. As the plane flew by, a triangle shape ‘opened’ in the cloud. The energies felt suddenly heavy, with the presence of less than friendly beings attempting to open a portal (transdimensional opening). Immediately, star family focused in around the triangle, with faces forming in the cloud.

As the cloud drifted higher and the plane flew away, a white-light pod ship flashed above the cloud (circled in this photo, with the plane circled at the lower right of the frame). 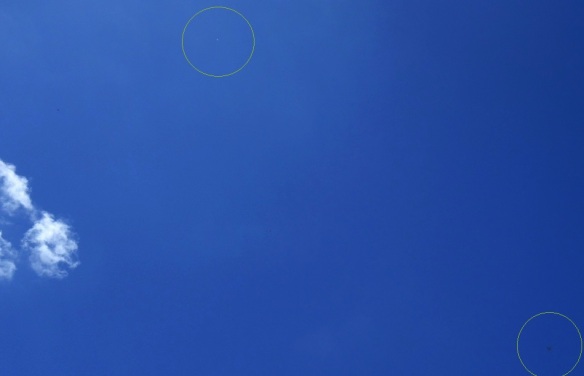 The camera lens caught a sun flare in light aqua blue, radiating down through the cloud just as the cloud triangle ‘melted inward’ like a waterfall, pouring softly through a clear disc-shaped ‘hole’ (beautifully ‘signposted’ by a round blue lens artifact right in the centre of the disc-hole). The white pod ship sat on the rim of the ‘cloud waterfall’ circled in this photo (see enlargement below), while the heavy energies swiftly dissolved.  🙂

This ‘dissolving portals’ theme continued into the evening of October 17th, this time with the Meri’Ashar overhead, the ship’s presence at first softly presenting just beneath a huge blue-violet orb between the Moon and Mars.

Once again, as clouds moved across the Moon, beings of the lower Mars energies attempted to open another portal, represented again as a triangle opening in the clouds (upside-down ‘black triangle’ with one tip touching Mars, and the other side clearly defined against the Moon’s light). 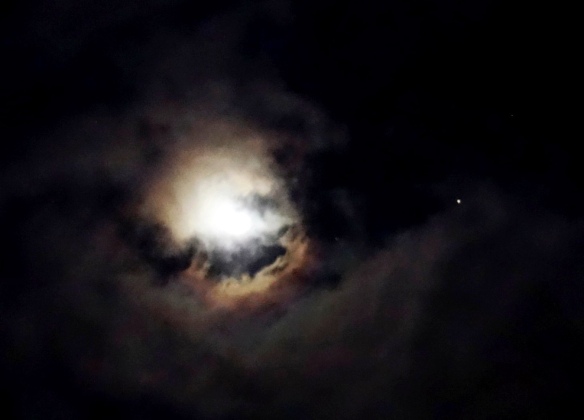 Three orbs aligned directly below Mars as the clouds dropped away (with a disc hole in the cloud directly beneath the Moon).

As clouds moved over again, a second triangle could be seen opening below the Moon, and the lightship Meri’Ashar showed as a bright white light stationed in front of it, while a sister ship, the Sophia/White Phoenix ‘high lighted’ the Moon from behind the clouds, as they transmuted heavy energies together and dissolved the portal.

The clouds around the Moon condensed inward and resolved into a beautiful loveheart radiating pure high frequencies, with a duck-like shape to the upper left, positioned as if flying into the heart. In animal symbolism, a flying duck signifies spiritual freedom…and as a waterbird, in that moment it represented the act of diving into Love!

After this resolving of energies, the clouds cleared away completely, with the Meri’Ashar keeping watch for a while close to Mars, sending a light pulse through the alignment between Mars and Moon. While attuning with Rowena&Arnap (5D soul expressions on board the Meri’Ashar), Mars/Aris appeared within my inner vision as a luminous flower surrounded in peachy golden petals of light, with a blue-green flame in the centre, rebirthing his sacred heart.

If ever you’re ‘feeling at sea’ with some of the heavier energies swirling in the Earth’s and humanity’s collective vibrational field, or further afield, just take a duck dive into your heart of Love…and know that there are guiding Lights within and around this planet constantly dissolving attempts to undermine the Shift, and these Lights are radiating and streaming the same Love that lives within you/us all, it’s all one flow we’re circulating together, and at the heart of this circulation is pure boundless joy!

As mentioned in the previous post, the crystal soul collectives are assisting in heightened, very precise (and precisely coordinated) flows through this month and beyond, with the ‘green-blue’ family of Green Flourite and Green Aventurine much to the fore through October, joined now by the Aquamarine beings…transitioning from this Full Moon today/tomorrow through to the 11-11-11 Gateway (November 11th 2018), into Deep Blue and Golden Light frequencies. The vibration of Aquamarine melds the green spectrum into blue, with a serene clarity of inner touch that relaxes and opens full receptivity to the Golden Christing/Restoring Light, bathing the inner child within each of us that is the seed of our co-creation of, and in innate harmony with, the New Earth.

With love & gratitude to All, enjoy the ‘love-hearted’ Full Moon, 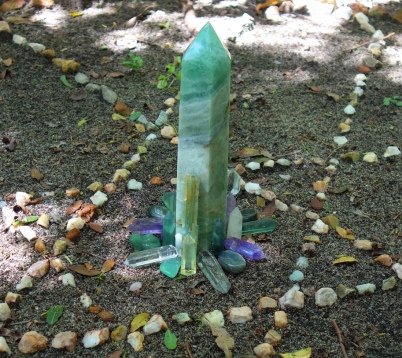 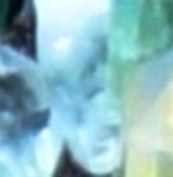 Some of the crystals in a node here, green and blue, flowing through to golden, with the faces of some beautiful crystal beings showing through an enlargement (upper right) of a piece of Aquamarine, sending love and ‘peaceful play’ to all.