I’d like to share two experiences from January and early March, 2016 (our summer) which show how we can work collaboratively with star family, with the elemental beings, the consciousness of Gaia, and each other as sister and brother souls in human form on Earth. This series of photographs taken on January 22-23 and March 2-3, shows the interweaving of all these energies as documented by me and my friend Rob Hartland simultaneously from our two ‘viewpoints’ a few streets apart….and how he and Shelley Hartland and my energies synchronized with our star brothers and sisters, to help reduce and put out bushfires in our area on those two occasions.

On the morning of January 22, I woke from a ‘dream’ featuring an aggressive dragon that appeared to be made of black smoke (and in which angelic help drove it away). When I came out to the kitchen for breakfast, a black goanna walked past the outside door, with its tail held in a very strange position, curved up and over its back rather like a scorpion, and I heard the internal message, ‘beware of the sting in the tail’.

Later that day, driving home back up the hill, the black dragon’s face flashed in my inner vision, and on rounding a bend, a plume of smoke was visible, rising from the suburb I live in. A large fire had started in the local National Park, and by the time I got home, fire engines, water-bomber planes and helicopters were arriving – in very hot conditions, with a strong wind blowing. I went into an Inner Heart meditation, put myself in the energy of peace and calm, put energetic protections around my home and then spread it out around our whole neighbourhood. Then connected with Gaia and the sylphs (air elementals) and asked for the wind to drop, and held the vision of the flames reducing down to the ground, the fire being put out. I walked outside and called on star family for help with containing the blaze. From my house, trees obscured the site of the fire, but seconds after sending the request to star family, two eagles appeared above the house, flying from the south, and stayed hovering over the roof for the next ten minutes. With the eagles came an inner message that two ships had been sent to the fire, and the wind also dropped.

Within a few hours the fire had been put out, and I learned from Rob and Shelley that they had done the same thing, putting protections around their home and our area and calling on star family for assistance. From their angle, Rob was able to photograph in the direction of the fire, and two small ships appeared in his pictures, near emergency services helicopters. Here’s one of his photos. 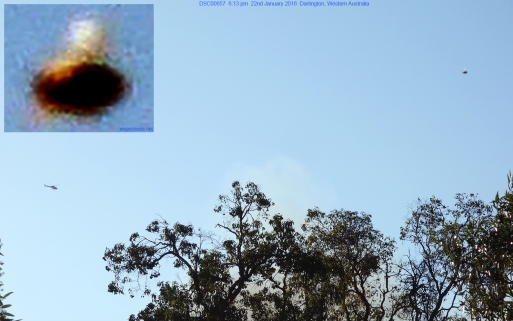 The next morning I heard fire engine sirens and helicopters again, and realized they were over the same area, and embers must have still been burning. This time I went into Inner Heart meditation with Gaia and the undines (water elementals) and asked for rain, as the day was again clear with a forecast for dry high heat. Within the next half hour, a patch of storm-clouds built up and moved right above the fire site. I could see blue sky on either side with a storm in the middle….and an eagle flew in this direction right in front of the clouds. 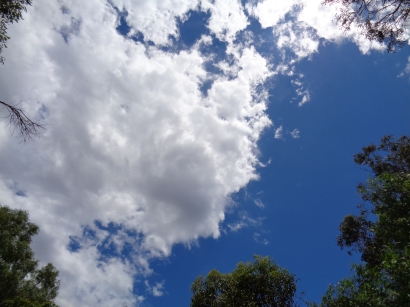 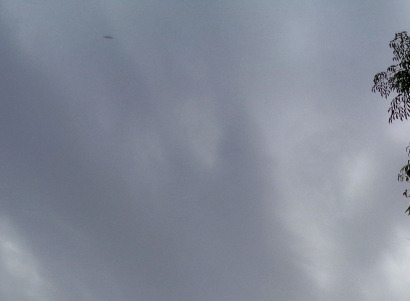 Rain poured down torrentially for about 15 minutes, soaking the earth, then the clouds dissipated and the sun shone again.

The helicopters circled a couple of times before leaving, and I imagine the pilots flew away mystified, but relieved!

The second fire, on March 2, was preceded again by seeing the black goanna with its odd curled tail again (I’ve never seen it again, and feel that energy has departed). This next fire was smaller, not far from the first one but close to houses. I asked star family for assistance again, and knew Rob and Shelley would do the same, and extend protections around the area. Rob was able to take the superb photos below, of a very clear small golden-coloured star family ship passing a helicopter. 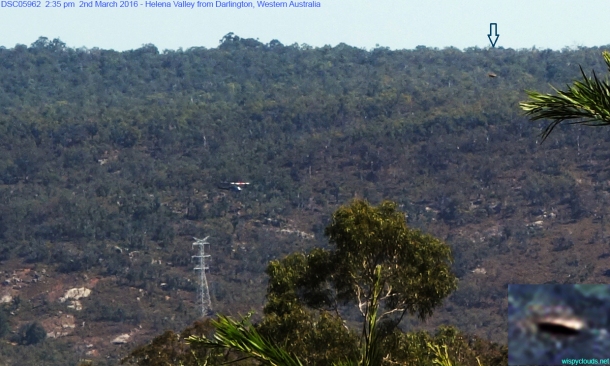 This time the fire was put out quickly, without needing rain to damp it down, thanks to our emergency services – with a little higher dimensional back-up! I asked for a deep clearing of the energies behind these fires, and it was the next day, March 3, that Ashura (my Twin Flame) sent this visual message of an eagle flying straight through a disc-shaped hole in the clouds, with his face visible in the clouds nearby…a message of love, and an ‘all clear’ from the fleet.

To bring this full circle, on January 10, 2015, I took a few pictures of the ship Ashura captains, the Shem Arua, uncloaked in its white light for the first time in photos, after asking if they could assist with a major fire burning north of Perth, visible from the building I was in at the time.

I hope this post conveys something of the beautiful interactions and interweaving our intentions and visions based in love can have with this planetary soul Gaia, with star family and elementals, and in fact with all Life, here and everywhere in the Universe/s. It is also important to state that this way of being, serving and co-creating with/in the higher dimensional frequencies and converging them with/in the third dimension, is in harmony with Source and with our soul when it flows from unconditional peace, trust and love for ourselves and all… when we’re in resonance with our higher selves, and therefore with our brothers and sisters across dimensions, as family and true friends.

True connection doesn’t need to control (seek to bend or influence energies by force of will). It allows, senses, attunes, trusts, flows with and through the natural affinity inherent in us all, to the energy of life. The deep magic of life is Love, beyond thoughts, emotions or things, yet flowing through them….always.

With Love to all, thanks to Ashura & star family, to Rob & Shelley Hartland, to the elementals, Gaia, and all beings holding the light of love around this planet while its Shift continues.

4 thoughts on “Love & the Interweaving of Energies”