Continuing on from the first part of this post about the lightship Shem Arua, I’d like to firstly share photos taken by Rob Hartland.* Rob and Shelley Hartland live close by, and Rob took the photos below from a street that runs toward my house on the morning of October 7, 2014. The Shem Arua is beautifullly represented here, with the concentric rings I spoke of around the ship disc shown distinctly here in Rob’s photos.

(Note: Other photographers caught this on camera too, with photos posted on a news site here, where it was described as a fallstreak cloud. However, given the times & locations of the shots, it would have meant the ‘cloud’ headed east, then turned around and headed west-southwest, all while maintaining its form with the concentric ringed rim for at least an hour and a half unchanged while travelling 20 kms).

Here’s one of my recent photos of the Shem Arua‘s 4D light-form, showing its rings…. 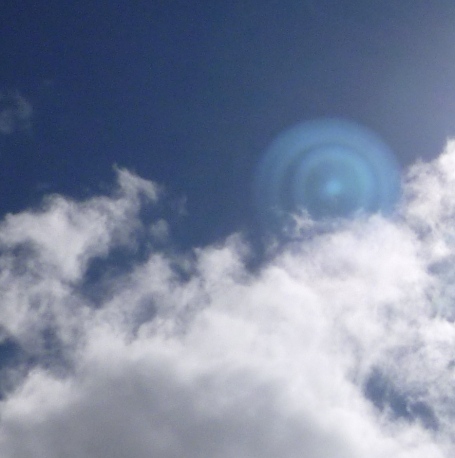 The Shem Arua behind cloud, October 2014.

Many ships are broadcasting higher frequencies around the planet, a ‘wake up call’, if you will, to the hearts of humanity to open and connect with Source within, to embrace unity, peace, love and cherishing of all Life – to take in the increasing waves of light coming from galactic centre, and raise their consciousness.

Star family of the AC (Ashtar Command) work to neutralize chemtrail toxins, diminish the effects of pollutants in air, water and earth, break down the artificial electro-magnetic grid around the planet imposed by those bent on maintaining the current control structures, and clear out malign beings behind those structures. More star nation groups within the Confederation are arriving around Earth, with their own specializations, such as the Alpha Centaurians, who are generating higher dimensional spheres of light around the Earth. More about them and their work soon. For now, I’ll  continue with the Shem Arua, its captain Ashura, my Twin Flame – see Part One of this post), and a small craft from the Shem Arua that landed here in May this year.

In hindsight, Ashura first appeared to me in April 2013, his projected light-form descending as a winged angel from a small cloaked ‘pod’ ship from the Shem Arua.

I wasn’t able to recover full remembrance of him then, and knew this figure simply as an Arcturian Angel. Ashura became known to me by his ‘honour name’ within the fleet, Arnap, in February 2014, when the Shem Arua was stationed in 4-5D on the ground here, with its Core connected into a node (chi channel) into the centre of Gaia, marked by the sacred circle in the photo below (see Gaia page). 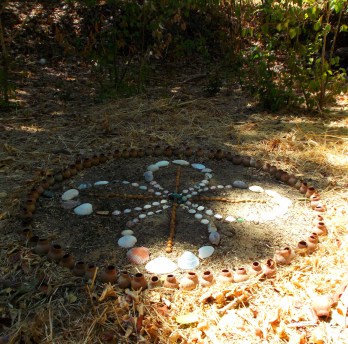 Sacred Circle in the beech grove.

The Shem Arua ‘unlocked’ the channel to transmit specific high light frequencies through the ship’s Core, a charge-up for the node and Gaia’s heart grid, with the purple flame of compassion, mercy, freedom embracing the white flame heart of Mother (reawakening of the divine feminine). Below, an orb descends into the centre of the sacred circle to open the blocked node. 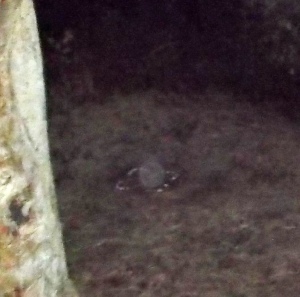 I could see/feel Ashura, firstly seated at a control panel in the ship, and met him on board, while asleep. Without knowing him as  my Twin Flame then, I still felt his immense warmth and calm. His energy is loyalty, fidelity to Source, and he showed me a White Rose in front of his heart – one who champions the White Rose, the Mother aspect of Source. His fleet name ‘Arnap’ carries the vibration of ‘One who steers through the Bow’, where the bow or crescent signifies the universal Mother.

After opening the node, the Shem Arua stayed on the ground (in 5D) for 10 days. When the ship was skyborn again, Ashura remained close, and many nights circled over the trees around the house in a small ‘pod’ ship, which appeared pulsing white light over the treetops. The  next photo shows the Shem Arua in a semi-cloaked ‘orb form’ near the Moon. Below it are photos of Ashura’s pod skirting the treetops. 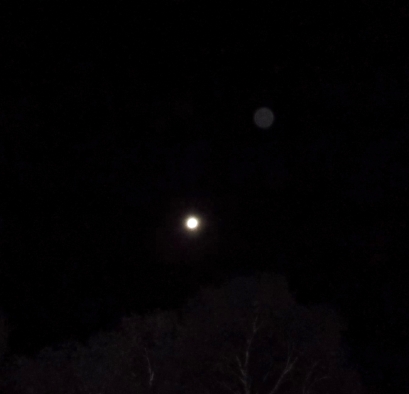 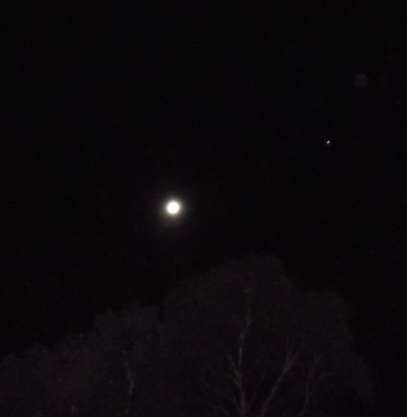 The Shem Arua, fainter, upper right, with Ashura’s pod descending from it. 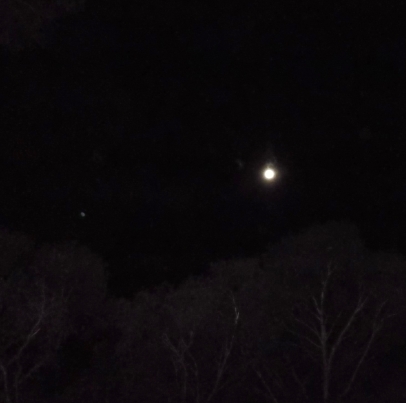 Ashura flies low over the treetops, on the left.

During this time, I had profound experiences, including a deep body healing, consciously aware, on board the Shem Arua and the Phoenix. A guardian leonine being, Al’tara, stayed close in orb form, and also in her leonine form standing semi-visible on the patio near the house (she appears about seven and a half to eight feet tall). The pure love emanating from these beings is so intense, yet deeply serene, beyond words, a direct, unconstrained heart-to-heart flow. I would love to beam it around the world – but of course, that is exactly what they/we are doing, BEing, constantly, as I know many of you reading these words are too.

In August, star family landed a small craft on the node, acting as a conduit for the Shem Arua to bring through a focused higher frequency of Light (during the period of the opening of the annual Lion’s Gate, heliacal rise of Sirius). The sequence of photos below shows the arrival and landing of the little ship, not into 3D but close 4D, what we refer to as ‘cloaked’, but I hope you will be able to see its circular rim in the final photo. With my neighbours’ house about 30 feet from the sacred circle, it wasn’t the moment for an uncloaked ‘light show’….though their kids might have enjoyed it!

Firstly, Arnap/Ashura’s pod appeared above a tree east of the circle:

Three orbs triangulated a space-time portal between the trees:

An orb ‘oriented’ (that’s the word they give me) the channel in the node correctly, and the energies felt highly amplified at this point. You can see the orb ‘grounded’ as a misty ball in the front ‘petal’ of the circle:

The circle bulged upward, then appeared to lift a few feet off the ground (there were shadows beneath it on the ground), actually a 3D illusion or ‘translation’ of an interfacing of dimensions, appearing as a displacement: 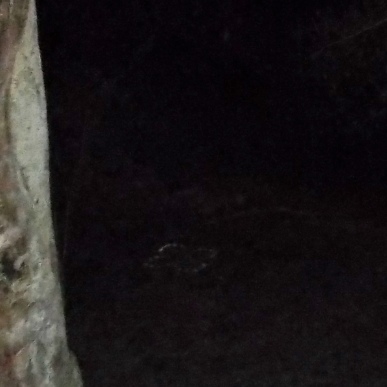 The circle settled back into its normal place, and energies spun vortex-like around it. Objects began to appear and disappear – in the photo below you can see a white stone in front of the circle, slightly to the right. There, and then gone again. It felt like things appearing from different timeframes – time fluctuations in the vortex:

The ship settled on the ground over the circle, almost fully ‘cloaked’, but with a bit of the rim showing. In the second photo below, I’ve drawn a line around the edge of the disc, in case you can’t spot it: 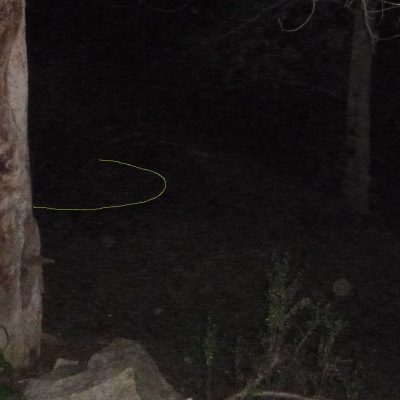 The ship then acted as an anchor for light transmitting from the Shem Arua into node and 5D heart-grid of Gaia. Throughout this operation, Ashura remained stationed above the tree to the east, with an orb alongside: 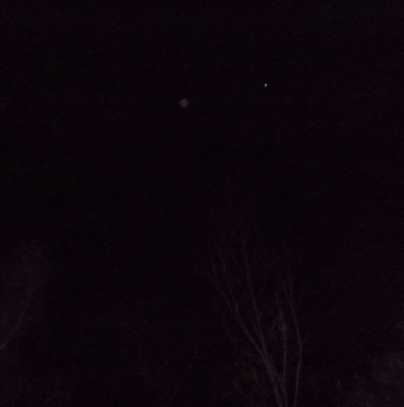 A closer photo of the orb, directly above the tree, with a face visible in it:

From higher up, Ashtar’s projected energy as an eagle light-form circled the garden, a sign of him overseeing/overlighting: 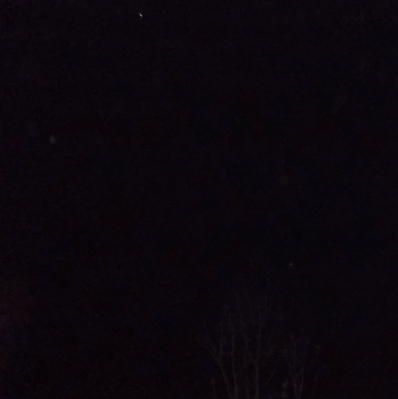 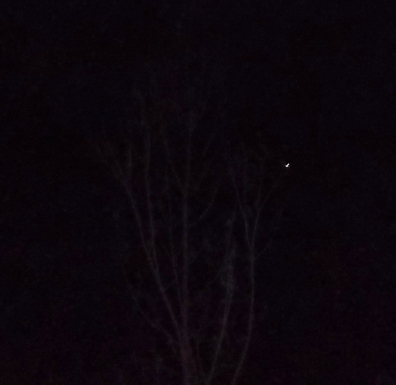 This is the clearest photo I have of his white eagle projection, from early last year:

The night after the landing of the ship, many beings flocked to the heightened frequencies, celebrating! 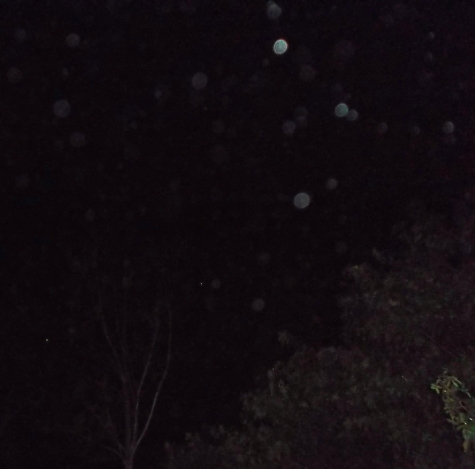 When the Dawn opens, be ready, when the Door opens, be steady.

‘’I AM the Rock of Ages.” Know this, breathe deep.

We are the Stars of Sages to Light the way from sleep.

Here we keep the Covenant, bringing Love is permanent.

Bless our roads, the Way of Life,

Know us true, beyond belief,

Beyond belief, Know the Life.

Convergence with higher dimensions comes from both ‘sides’ – and when it does, we know we are all One. Our star families have brought forth their frequencies to touch the range of fourth dimension. It is up to humans on Earth currently focused into 3D to lift their frequencies higher through love and peace, centering in the Inner Heart, to meet that touch. Feel deeply now into what brings convergence with realms of Love, of higher Light, into your reality. Free yourself of linear perspectives of the mind – time lines, personality charts of any type that keep reinforcing ego identity, recycling of chronologies and old or current life events, negative thoughts about your self or others. Trust deeper. Let go. Bless your ego, and surrender it to the Wave ~ let the Wave flow through it constantly, unlimited, into union and joy beyond its imaginings.

Love to all ‘on the ground’ and all beings guiding and assisting the Shift, to the Ashtar Command, and to Ashura as Arnap and the crew of the Shem Arua, upholding the White Flame, the Mother Rose, bringing the new dawn with all of us committed to ‘holding the faith, whatever comes’, through compassion and mercy.

If you find your spirits flagging – or false-flagging, getting caught in the Game – breathe in the White Rose, hold it in your heart, fill your Being with it. Fidelity to Source is peace, and true peace situates you in the point of convergence with the New Earth, magnetizing not ‘lines’, but all emanations of Source Love, as if you are the hub of an infinite sphere with no ‘edge’. Then your world can transform. 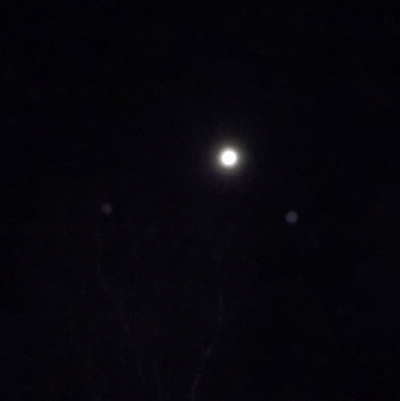 With Love and Blessings to all,

* Rob and Shelley Hartland’s beautiful photos of ships, orbs and other light phenomena can be viewed at their wispyclouds.net website.

*Lights in the Sky continues with Part Three here.

15 thoughts on “Lights in the Sky Part 2: Love on the Ground”