This is a small update before I get into a longer post. It’s also a request to attune to the water element from your Heart Star, which I’ll speak about below, on behalf of the planet and all life. You are probably aware of ongoing Earth movements that have become obvious during the last weeks at the surface level, with numerous earthquakes in Japan and Ecuador, on either side of the Pacific Rim, with many fatalities and injuries. This last week there have also been strong quakes in Vanuatu, the North-eastern Pacific Rise, and indeed the west coast of France, to give an idea of how global the earth shiftings are at present. We send prayers for the departed and all affected, and this includes our human brothers and sisters, and animals, plants and all lifeforms.

Ashura (my Twin Flame) and I have had a focus during the last week with Niue, an island atoll in the South Pacific, which is known as ‘the rock of the Pacific’. Niue sits in a central position between Fiji, Samoa and Tonga, with Vanuatu to the west, the Cook Islands and Tahiti to the east, and is close to the Tonga Trench, which runs down to New Zealand.

Star family have done much stabilization, radiating from Niue, and in other key points, keeping the majority of quakes deep below the ocean bed, and surface movements to a minimum. Having said that, as all energies are interwoven, the intensity of the planet’s shiftings are affected, and increased (or eased) by the human collective ‘mental-emotional output’. And that is where we here as human anchors come in, dear friends, to help ‘ease the tide’. To those who have been focusing love into Gaia’s heart – some of you working through nodes and leylines – be assured that the collective loving flow, for peace and balance, even from a relatively small number, is felt and utilized. To all reading this, any input of pure unconditional love is magnified through the higher dimensional heart grid of this planet. So know that whatever you give in alignment with Gaia, every bit supports the Whole, and all contributions of loving energy and intention help.

Connecting through your heart with the heart of Gaia, you can simply send love, or focus it through visualization and sound, which you can find a practice for below. Before that, I’d like to introduce another star family group within the Ashtar Command who are very much involved with steadying the planet, through the water element. They are specialists of sound-in-water, amphibious beings who come from a planet of the star Acamar, in the constellation Eridanus, the River – in the ‘Heavenly Waters’ region of the galaxy. 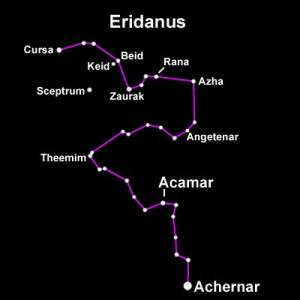 Their reflection on Earth is in the frog species, so just feel the frogs’ relationship with water and sound, the rhythmic nature of their vocalizations, and the transformation from tadpole into frog representing beings at home in water and on land, water and air breathers. I hope the photos below will give you a good sense of these kind, gentle star beings. Firstly, as I was beginning to connect with them, a frog appeared in my garden (they’re usually very shy, but this one sat in the open and let me take a photo of it). 🙂 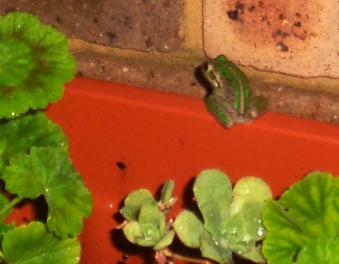 Then this beautiful golden being appeared at about my eye level, in a photo I took during a rain shower. As you can see, it’s both frog-like and tadpole-like, as if in the moment of transformation as it climbs out of a well of white light, with green around its heart area. 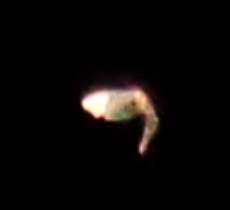 Golden being climbing out of a well of light, photo taken April 9th, 2016.

Here’s an orb from the same night, with an Acamarian face inside an angelic protecting ring of light, who has large, prominent eyes spaced well apart, and a wide, smiling mouth. 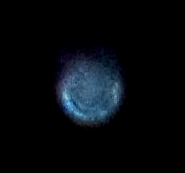 And another orb, from April 25th. The face showing in this one is more green, but with similar features.

The Acamarians work closely with the Cetian, Sirian and Pleiadian Whale beings, Dolphin beings and more humanoid watery beings such as the Tau Cetians). Whale beings provide the ‘watery’ aspect of the ‘sound-frame of creation’ (Leonines express the fire aspect, Carians and Angels the air and ether aspects, from the original whole of the Shimura, which I’ll write about soon). Dolphin and Mer-beings weave the tones, and the Acamarians/amphibious beings have the role of ‘sound engineers’ or technicians. They balance the tones and organize them into patterns that the human ear would hear as rhythms and sequences.

If you are familiar with Dr. Emoto’s life-work of showing ‘the memory of water’, the way in which energies focused by intention into water form into crystalline ‘sound-forms’, such as the one below, then imagine our Acamarian friends pulsing love-through-sound in specific sequences, to amplify divine qualities of peace and harmony through the salt crystals in the waters of the oceans, into the crystalline bedrock, and oceanic sands, reefs and corals and lessen the chaotic frequencies that have recently led to multiple quakes and mass coral bleaching events. 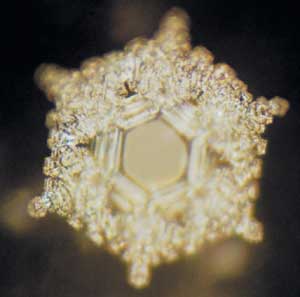 From Dr. Emoto: “Water is the mirror that has the ability to show us what we cannot see. It is a blueprint for our reality, which can change with a single, positive thought. All it takes is faith, if you’re open to it.”

The beautiful simplicity of his words really fills my heart – the simplicity of Being Present with the sacredness of life, and holding faith with life’s transformative potential in every moment. Here is a practice for activating that potential, through your Heart Star.

Then let the white rays of your Heart Star, the imperishable flame of Source within you, radiate out further, through the area where you live. Feel those rays flowing through everything, through the water molecules within the air, plants, animals, humans, in the earth and waterways, and spreading all through and around the Earth, connecting with the crystalline heart of Gaia and flowing through the heart grid, the higher dimensional ‘goldenprint’ of Life.

Now gently breathe golden light into your heart centre, and when you have a strong golden ball there, pulse it outward, and feel those pulses ripple around and through the whole planet. If you wish to add sound into the golden flow of light, you can use these universal creation tones:  Hu’Aa KuWa.  Speak them or sing them as you wish, feeling the tone and pitch your voice naturally goes to, and expresses, within the Whole harmonic range. Hu’Aa KuWa….Creation Sound (Hu) We in our Wholeness (Aa) Gift (Ku) Life (Wa). Feel this Gifting to Life in relation to the offering of Life from Source (as spoken of in the previous post), that which provides, Providence. Hu’Aa KuWa sends the quality of providence into life, so focus it now into the water element, to interweave with the divine tones and ‘sound engineering’ of our star family. A large release of ‘trapped feminine’ energies has taken place, and now we have the opportunity to settle it in through our own beings and around the planet, dissolving ‘the old’ and embracing the KuWa, the energy of providence.

With Love and Peace to All, 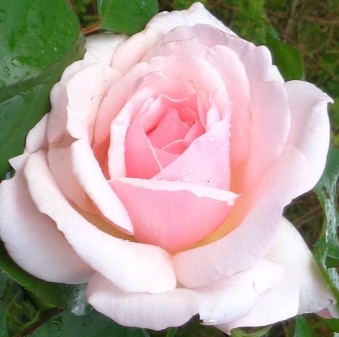 The invitation below came to me a few days ago from some beautiful souls in New Zealand who are holding a ‘Pacific Rim’ meditation/prayer circle at sunrise on the 28th of June. The intention to bring peace, harmony, balance and healing to the waters of the Pacific Ocean can be joined by all people living around the Pacific rim, and indeed everyone on Mother Earth.

Via the water within us and all life, intention connects and flows through the water element all around the planet, so please feel free to join in at your dawn time, wherever you are. ❤ 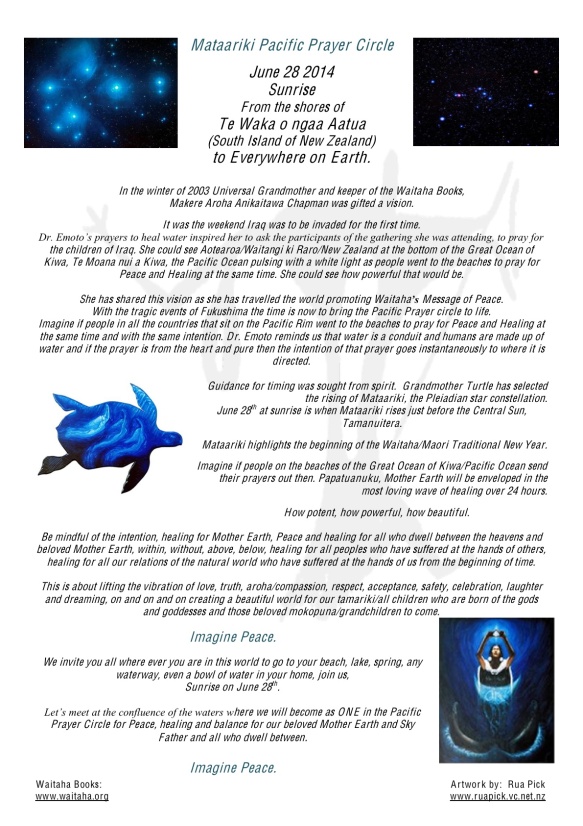 Thank you to Grandmother Makere Chapman for this vision of deep love and peace for Gaia and all beings travelling with her.

Let’s meet at the confluence of the waters within us all…and Imagine Peace…. ❤

To see how water responds to intention and vibration, watch this beautiful video applying the understandings of Dr Emoto: