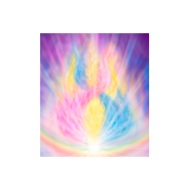 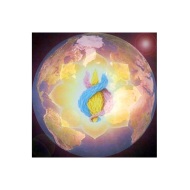 Coming into the peak of the 2018 Lion’s Gate on August 8th (8-8, the vibration of the Double Infinity), inbetween the deep-reaching Lunar Eclipse of July 28th and the completion of this ‘Eclipse Trinity’ with a partial Solar Eclipse on August 11th, we’ll take a moment to share a sequence of photos of the Lunar Eclipse that show the waves of clearing and transformation of Moon-Mars energies initiated on July 28th, with clearing effects rolling through to the completion of this phase with the August 11th Eclipse.

Either side of the Lunar Eclipse, clouds in front of the moon symbolized the aligning energies, firstly on July 26th with an appearance of the Christed Feminine in the form of a woman standing in cross-form with a large bow (or crescent/arch) to her left, reaching her hand toward Mars. 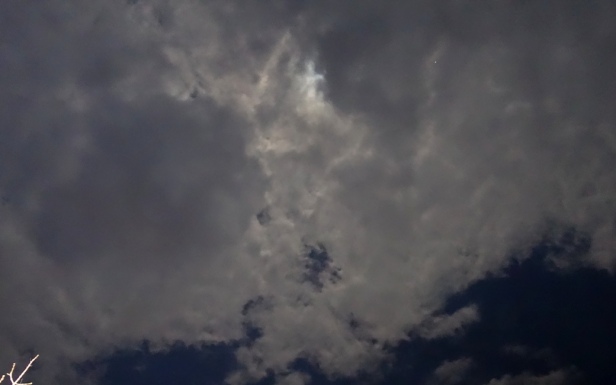 Divine Feminine ‘goddess of the bow’ forms in front of the Moon, standing in a Christ-cross pose and reaching her hand toward Mars (at the right), July 26, 2018. 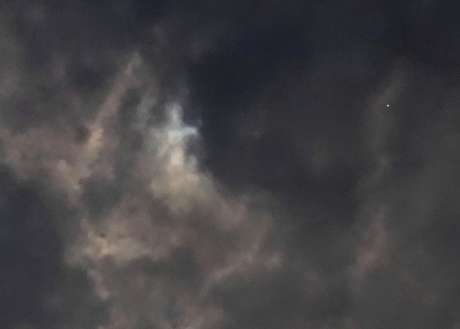 This Eclipse preparation showed through so joyously, with the Divine Feminine standing in her pure Light, while the shadow forms she has been viewed through (‘capricious goddesses’ requiring worshipful placation, as with portrayals of Artemis/Diana, lunar goddess of the hunt in the Greek and Roman pantheons, and other feminine deities imprinted with a martial/Martian aspect) can be seen peeling away through the Bow.  From hunting bow to the Arc of the Divine Mother, from death-blows to cradling embrace in Love, seen, known and felt as Unconditional Love and Cherishment again as distortions dissolve.

The Eclipse itself peaked at 4:20am on July 28th here; the photo sequence below came through between 4-5am in communion with soul family, with many 5d+ beings and beautiful ships focusing their Light to transmute each wave of lower astral energies that churned out toward the Moon and Earth from the 4D grid around Mars. This is the first stage of a release and transformation of the Martian shadow matrix, being implemented for the upliftment of that planetary soul’s energy field, within the overall ascension of the Solar System. The ‘astral mists’ in these photos were not visible in 3D, but appeared clearly as I/we were tuned to the Shifting process, and how this appeared was that each time a ‘wave of unrest’ came through, white orbs showed where soul lights transmuted the energies, wave by wave. 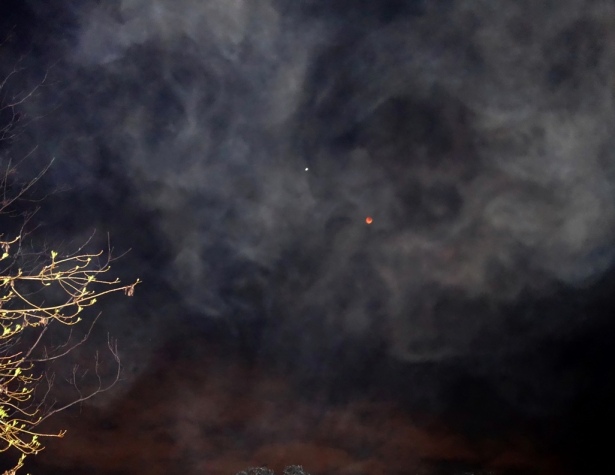 July 28th, Eclipsed Moon appears red, with Mars close by, upper left, in swathes of lower astral energies that were continuously transmuted into Peace & Love by many assisting Light Beings and ships of the Ashtar Command. 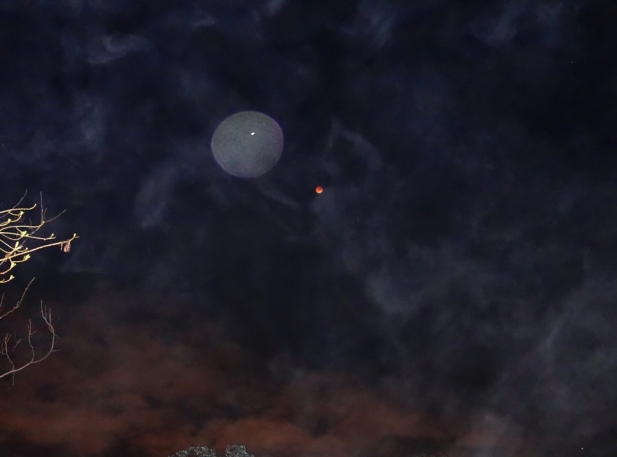 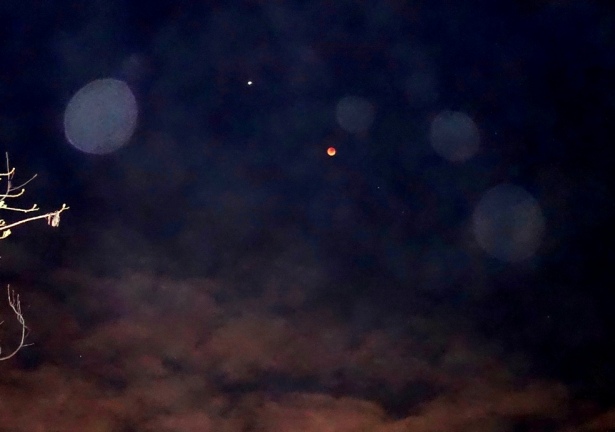 Our orb is joined by a ‘Trinity of Lights’ forming a protecting Bow/Arc around the Eclipsing Moon, with many helpers. 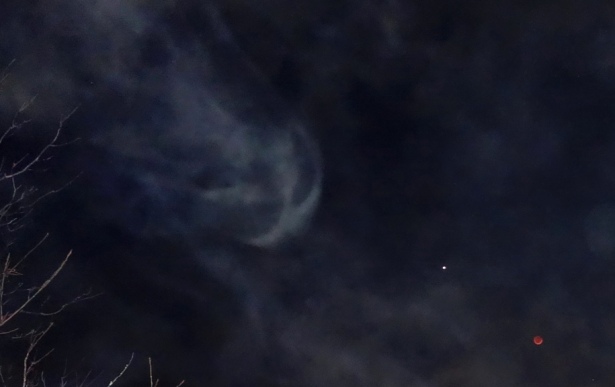 A concentrated stream of dense energies/entities sweeps in…. 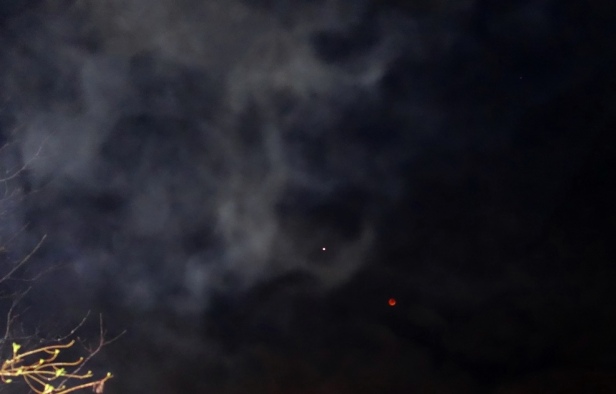 …spreading into black heart shapes, with one clearly visible around Mars… 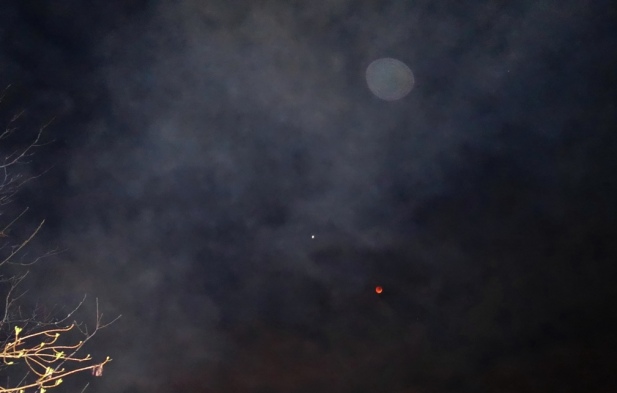 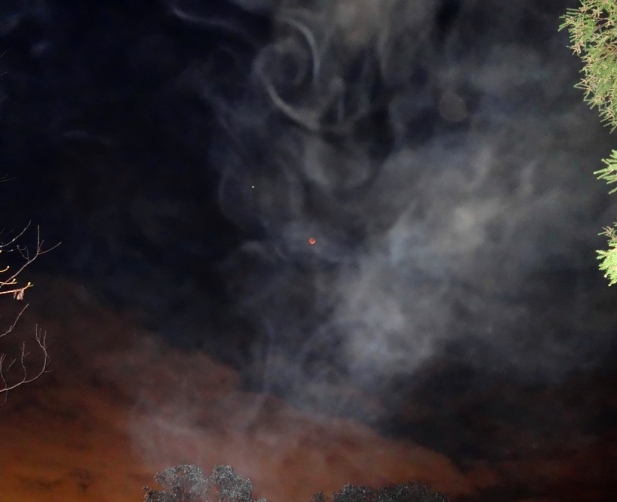 Another ‘wave’ of astral entities and dense imprints/phantasms comes through. 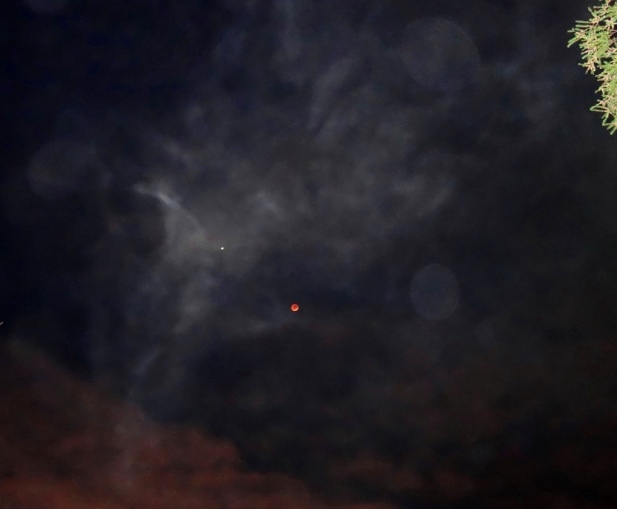 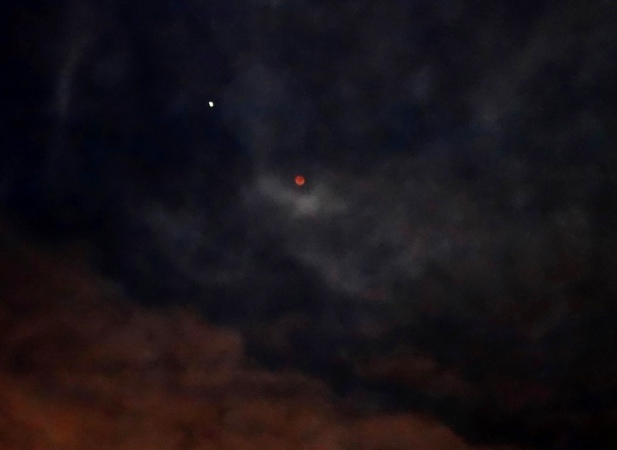 …with a cradling ‘nest’ forming around the Moon. 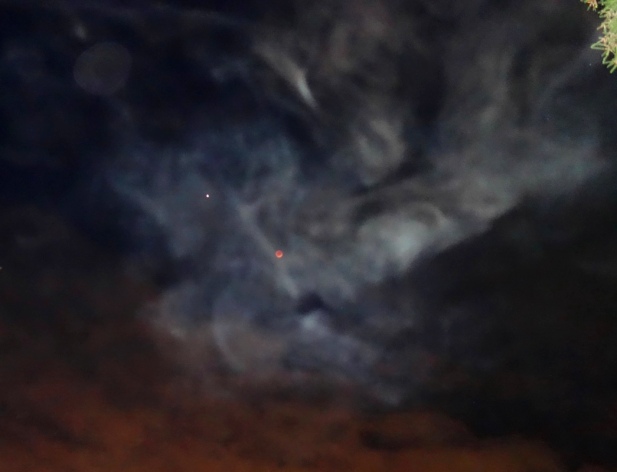 Another wave, this time with a very large ship visible below the Moon, with energies bearing down toward it (see crops below, with photo turned around – disc-shaped ship lower right of Moon). 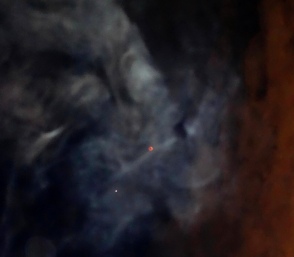 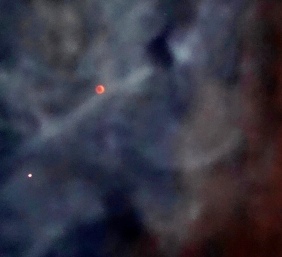 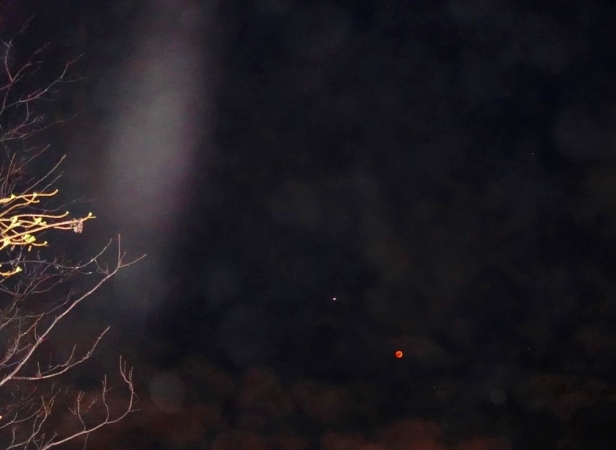 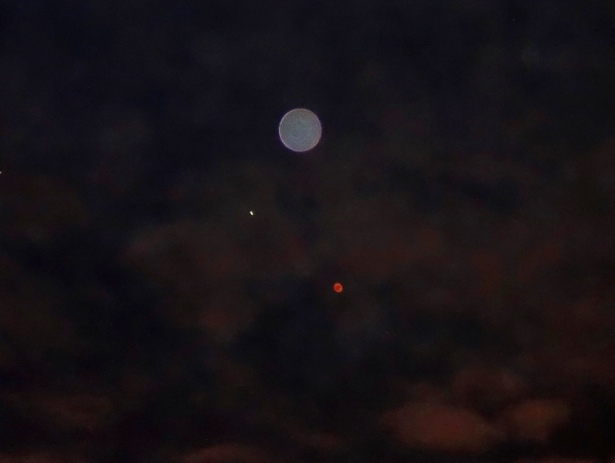 Energies of unrest have resolved into peaceful equilibrium, held in love and grace.

In the wake of this awesome Eclipse clearing, the last week has seen much adjusting and easing on the subtle levels, and from an Earth perspective, a deeper reaffirming and amplifying of the New Earth Light-Grid, as it flows and transmits frequencies/codes/vibrational integrations of higher consciousness, universal love, and unity to all life here, and indeed, further afield.

On the night of July 28th, Beings of Love wrote signs around the Moon, of the successful fulfillment of this phase of renewal of Divine Alignment among our sun Solaris’s ‘companion family’ of planets and moons…so beautiful to witness, feel and radiate, in this transformational journey we are all travelling with and sharing. 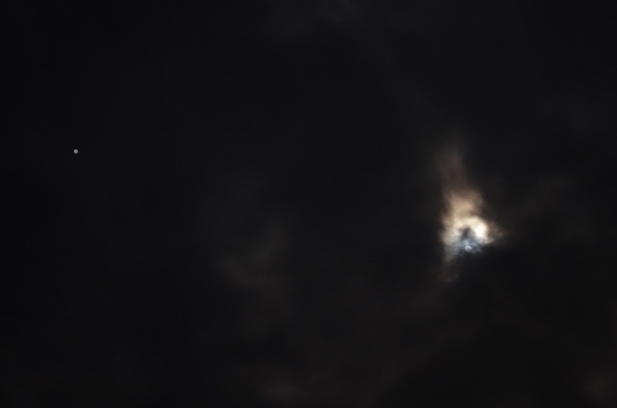 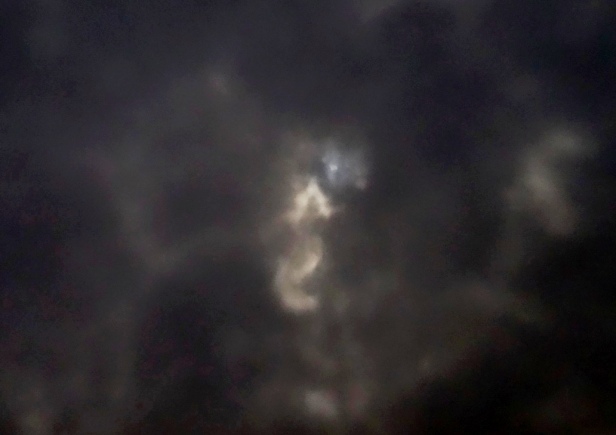 As the ‘signs aligned’, a lightship appeared mirroring the Moon ~ or as there are layers of meaning and symbolism here, it could be seen as a Twin Moon, phasing unveiled across the opened, shifting spacetime fabric. 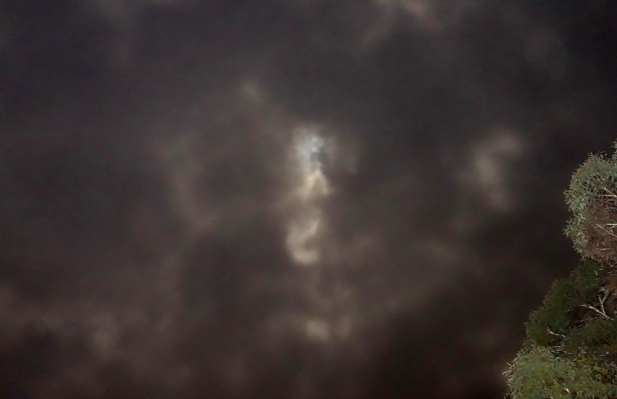 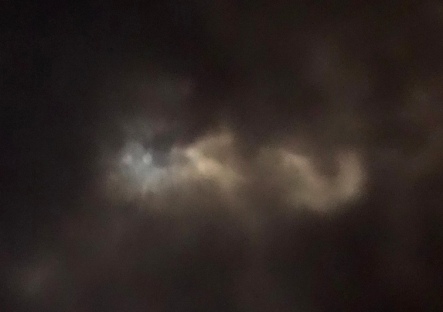 Choose to stay loving and peaceful within these shifts, beautiful friends, and through turbulent appearances of extremes in the collective and planetary field. Imagine you are viewing this lovely planet from the perspective of a Being of pure LoveLight existing beyond the ‘veil’ and its shadow-screen, unaffected by it, clearly seeing and feeling through your divine heart in every moment, blissfully aligned with the purpose of Being Love, radiating love to all around you and all life, trusting the transformation-in-progress you/we are sharing in and assisting with countless loving beings. You/we all are these Beings, emanations of Love and Joy, of Divine Light.  🙂 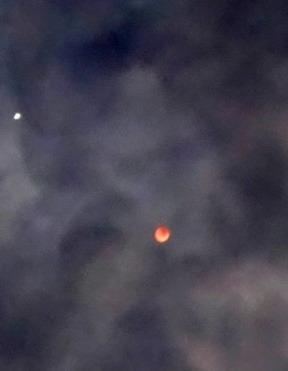 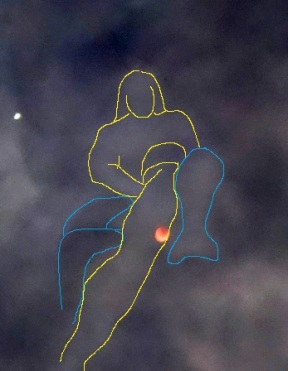 Energies of Ashura and many Divine Masculine soul expressions flow through this subtle shaping of ‘Aquarius the Water-bearer’ surrounded by dolphins as he pours a divine light-stream around the eclipsed Moon ~ fire and water in Oneness, heralding this ‘new age’.

PS: During this ‘eclipse window’ is an optimal time to activate (or reaffirm/strengthen) the Well of Dreams Chakra, a chakra that sits in the brain stem area, now renewing at a collective level and a key to overwriting the old fear-based ‘programming’ in the brain with new visions and creations aligned with Universal Love. Holding the image or intention of a pink Peony Rose (pictured below) in/around this chakra deeply assists its opening and clarity of vibration (see Practice 7 on the Practices page for guidance with this). 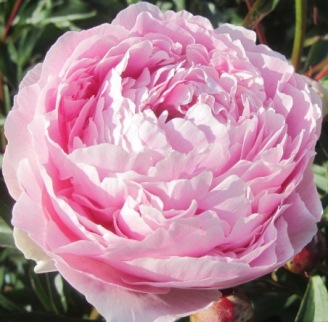