This year ‘has wings on’, and before April flies away completely, we’ll dedicate this post to the House of Meraia, the soul group which Ashura and I focus our light and energy from and through in this region of this galaxy. As Source Beings, like all of you reading this, we have soul expressions in multiple universes and galaxies, stars and planets, within various dimensions, but today we’ll speak from this particular ‘soul focus group’ which dwells in and radiates a concentrated flow of Resurrection light and Rebirthing energies. Also known as the House of Michael&Mary (Archangel Michael&Mother Mary), the hub of its Light in this region can be seen in the great Bow of the Mother that runs from the twin stars Alcor&Mizar in Ursa Major (the Bear constellation/Big Dipper), where the Alectian and Alexian star families live, through the angelic centrepoint of Arcturus, to the star Spica in the ‘hip of the Virgin’ (Virgo constellation).

Spica from Latin means ‘ear’, the ear of grain symbolizing the ancient Mother Goddess of bountiful seeding and growth of life, Ceres/Demeter…and the feminine spiral/funnel from which the external and inner spirals of the ear are reflected in our 3D forms, the spiral which receives the ‘tones of life’, in both a physical and higher vibrational sense: ‘Spica speaks to the open ear’. Spica in Hebrew is Zerah, meaning ‘seed’…the Seed of the Virgin/Virgo. Can you feel the deeper metaphor of the Virgin Mary’s conception of Jesus, that she conceived by ‘hearing the word of God‘ through the Lily of Archangel Gabriel (which in some versions of the story, he touched to her ear), and the birth and resurrection pathway initiated from that hearing – sacred sound of Source funnelling into and through the divine feminine spiral?

Spica and Arcturus also form a right-angled triangle with Regulus, the ‘heart star’ of Leo,  the lion constellation, called the Spring Triangle:

This triune ‘right angle’ mirrors the two soul group streams that merged to form the House of Meraia; Angelic souls and Leonine souls, the galactic Houses of Asha and Ara that merged to become one House, which created a third energy, the Meraia, from the angels of Asha (energies of eternal rebirth like a phoenix from the ashes) and the leonines of Ara (energies of infinite life creation and restoration). The merged soul group energy pools together the flows of creation and rebirth into resurrection and ascension, the golden and the white lights blended and shielded in the Mother’s Bow of Blue….which is expressed in the sacred geometric form of the Vesica Piscis:

From Sananda: ‘The Ash and the Ar together make a Star’ (Ashar), and this star is of both the 6-point star energy of harmony and bliss, through gratitude and appreciation, and the 7-point star energy of joyful love through the flow of divine grace. Together, the 6+7 bring through the 13th dimensional pure Light spiral that we call ‘Ascension’, because it realigns life to the original ‘goldenprint of Love’, through the ring of 12 dimensions, 12 rays, 12 signs etc. The 6 and the 7 can be seen in the Flower of Life, which forms or ‘flowers’ from the vesica piscis, and returns to it, and in the 7-point star which we have shown before in purple light across the Meri’Ashar (Mary’s Star, our lightship), and which is now in golden light across the ship, in full resurrection mode: 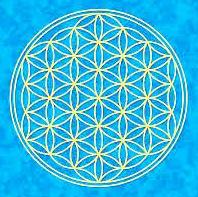 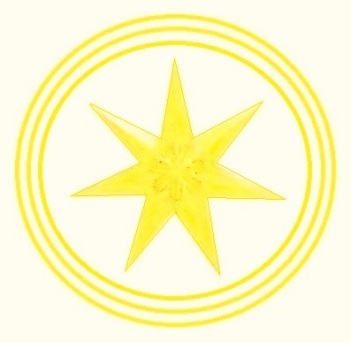 Through the divine feminine mandorla/portal (vesica) swims the fish (piscis), to which the symbol of the fish for Sananda in his Jesus form is metaphysically connected. Jesus as the ‘Lion of God’, Archangel Ariel – meaning ‘Archangel Lion of God’, Ashtar’s golden lightship, the Phoenix, and his Twin Flame Immara (Isis)’s lightship the Sophia/White Phoenix, all show aspects of the meeting and merging of the Ara&Asha in the House of Michael&Mary, in the blue light of protection. Archangel Michael flows the divine masculine blue sword of Truth that shears away darkness/distorted light, and Mary spreads the divine feminine blue cloak, depicted since medieval times as the ‘Protecting Veil’…through the blue safely flows the light of golden-white. ‘God moved upon the waters’, and through the feminine waters, ‘Mare’ (Ma-Ray), Latin for sea, flows the third energy of the Divine Child, as the fish. From Sananda: ‘Through the Mother comes the Son, and through the Son comes the Mother.’ 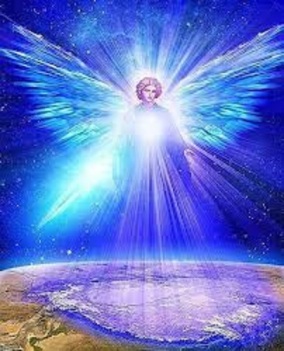 There is another key star formation we’ll include here, called the Great Diamond or the Diamond of Virgo, as its base point is at Spica, with Arcturus and Denebola (tail of Leo) to the sides, and Cor Caroli, alpha star of Canes Venatici (the ‘hunting dogs’ of the herdsman Bootes), in relation to the ‘Arcturian Diamond’ input into this area, and to the constellation nestled within the protecting diamond light, Coma Berenices. This constellation is named after a historical figure, who dedicated her hair ‘to all the gods’. Hair has many symbolic meanings, often connected with ‘fate’, such as the belief of karma being carried in the hair, subtle connections of hair to the ‘otherworld’, and to the ancient Triple Goddess represented as the Three Fates, the spinner, weaver and cutter of the cloth. Berenice dedicating her hair to the gods, within the pure protecting light of the Great Diamond, symbolizes uplifting the fate of the ‘mortal coil’ (limited DNA), resurrecting it through eternal light of the gods (the Divine essence within us all), and is, we could say, a storehouse of strands of high light, in the Diamond of Virgo – seen as both maiden and mother. ‘Through the Mother comes the Daughter, and through the Daughter comes the Mother.’

The Diamond comes through the Vesica Piscis, as the Divine Feminine shield:

This is the basis and underlying energy of a practice given by Archangel Michael a few years ago, the Blue Diamond of Protection, which you can read on this page…and feel free to use it!

As in the heavens, so on the Earth; this planet has particular places (flow lines and node points that are part of its natural network of light/life force) where the Meraia are closely connected, such as the St Michael&Mary Leyline (mapped through Britain, but it runs as a ‘sine wave’ all around the planet)…and these alignments are gradually being cleared of blockages and disturbances, restored to their higher light flows (thank you, teams on Earth, within the Earth and above)…but of course, we can all connect with beings of highest Love, including our own higher soul aspects, from wherever we are simply by asking with love in our hearts. Remember your Inner Heart is your natural divine meeting place/space, and your deepest, purest place for healing and creating in merge with your soul’s purpose.

Here are some recent photos through which the Meraia energies can be seen and felt ‘in action’: firstly on March 20th this was the sky over my house before and after a meditation connected with clearing and relighting planetary flow lines. Before the meditation, the sky was thick with chemtrails that combined with smoke to form this heavy blanket:

After meditating and connecting with Immara and Ashtar, and the phoenix rebirth energies, the focus and reflection in the sky overhead could be seen as ‘white phoenix’ angelic forms in the clouds, neutralizing toxins and dissolving the blanket:

And a beautiful greeting and energy alignment on Easter Saturday from close family members, with white phoenix energies, divine feminine, the white lily of Archangel Gabriel, and leonine energies. This began with a little ‘walking angel’ cloud, with a ship above it, and Ashura’s silver-white pod-ship coming in (right-hand top of the frame): 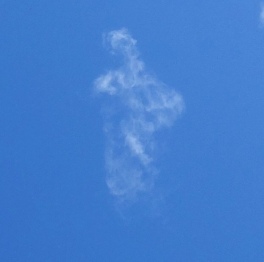 Followed by this beautiful ‘cloud burst’ above the treetops, with the ‘trinity-petaled white lily’ opening in the centre of phoenix flame:

On its side, you can see the outline of a dove, flying into the open petals of the lily, with Ashura’s little silver-white ship just beneath the cloud (bottom of centre frame): 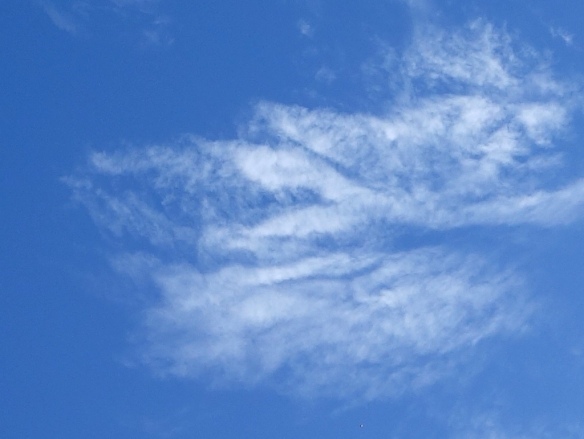 So we’ll end this post with a request/intention I use every day as part of my morning meditation:

Beloved Archangel Michael & Mother Mary, please keep your blue cloak of light around me throughout this day and night, and help me to stay in divine truth, clarity, discernment, steadfastness, courage, faith and joy. I love you, thank you.

We’ll share more about Virgo, Spica and the path of Jupiter in relation to planetary ascension soon. We love and greet you as souls of Source, lights of transformation….as are you,

7 thoughts on “The House of Meraia”