Today I’d like to speak about a massive release of oppressive energies from the Earth which has been underway at an accelerated pace since the last full moon in May. The lower astral (3-4D interface/slowest frequency bands of 4D) has been filled with the dreams and nightmares of humanity on a planet experiencing extreme polarity since the fall of Atlantis – dreams and nightmares that have taken on etheric and plasmic forms, manipulated and utilized for psychic control by ‘fear & power’-oriented entities and beings who are adept at moving through the astral planes and know human fallibilities inside out. What those beings have forgotten – in some cases been far out of alignment with for eons – is Love. In the last few weeks I’ve been seeing and sensing a major recouperation process – a re-gathering of lost and unquiet souls into the embrace of Love that has no conditions, and which by its nature, wherever it flows, restores the fabric of the divine ‘goldenprint’ of Life. The more freely and widely Love flows, the deeper the restoration, and as chaotic souls are re-gathered, while the frequency bands of the astral plane receive a deeper flushing out, the more a higher dimensional state of peace and wholeness is anchored on and around the planet. And the more the love realm is established, the astral levels flushed and the etheric cleared, the less of a hold those playing the part of oppressors in the human world have, as their underlying energetic support framework dissolves.

To show you this process, I’ll go back firstly to the night after the full moon in May, when this accelerated release was catalyzed. In the photos below, taken on May 23rd, the two trees in the foreground mark the border of my garden facing east. The trees in the background are in my neighbour’s yard, and you can see what looks like a dense, swirling cloud beyond the foreground trees but pouring through the background trees. (I maintain a protection around my house and garden, and will speak of it below). 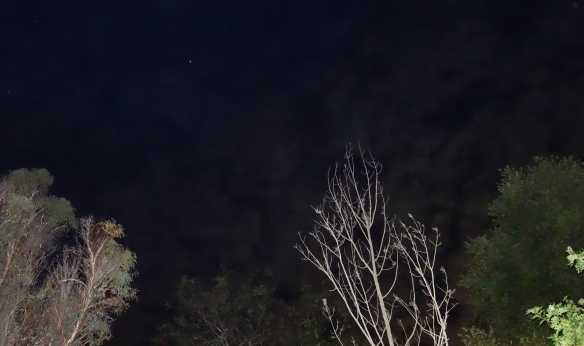 This second photo was taken about five minutes later. There’s a large orb in the upper frame left of centre, which you can maybe see a pinkish tinge to. This orb is a projection of my higher dimensional energies while dissipating the ‘astral murk’ away from this area.

A week later, while walking in nearby bushland on May 30th, I had a sudden feeling to look over my shoulder, and saw a plume of smoke going up from the hillside. Although burn-offs are common at this time of year, the photo below shows an unusually clear shadow being in daylight, which appeared to be gesturing toward the fire. The smoke took on forms that were almost solid-looking after this, and I sent a request for help to star family.

The figure standing in a fourth dimensional doorway between two grasstrees appears no more than three and a half feet tall, but with clear human proportions. I’ve felt ‘unquiet spirits’ in this area of bush before, and always walk protected (I recommend the Golden Apple practice). A small ship from the Ashtar Command fleet can be seen flying down toward the smoke here, neutralizing potentially destructive energies. Thank you dear friends.

The following night, May 31st, this is how the smoke appeared from my home, gradually dissipating into bands after a day of heavy smoke cover.

As it dissolved, the stars shone through. The Southern Cross constellation was bright overhead, yet a dark energy was projecting ‘through’ it, which visualized as a sort of ‘broken orb’ with a group of beings leaking out of it.

‘Leaking orb’ appears within the Southern Cross/Crux constellation. Photo: May 31, 2016.

I’ll speak more about the situation in that galactic region soon (with particular regard to the star Canopus) but for now will say that much work has been done recently to detach the influence of a central control point of fear-based energies in the old Argo Navis constellation, which certain groups are trying to re-attach. A few seconds after taking the photo above, a pure energy came through, and you can see in the next photo a large orb which is giving the appearance of being behind one of the stars of the Southern Cross, but covering the smaller star of the five in that group – and I heard from star family, “We’ve got it covered.” Haha, cosmic sense of humour. 🙂

Orb behind the lower star of the Southern Cross/Crux constellation, and covering the small star on the right side. The two stars ‘pointing’ to the Southern Cross form the left are Alpha & Beta Centauri. Photo: May 31, 2016. 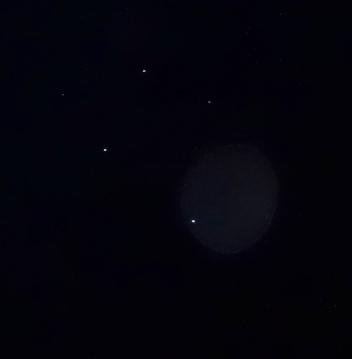 Through the first half of June, as the ‘flush out’ has continued, many orbs have appeared which show beings from Grey groups and other control factions being gathered together within Angelic and Feline ‘light envelopes’. In some of them, a feline/leonine or other higher dimensional being can be seen/felt overseeing the gathered souls, to be given into the care of those who specialize in healing and restoring soul energies. Here are a few of the photos I’ve taken during this period. 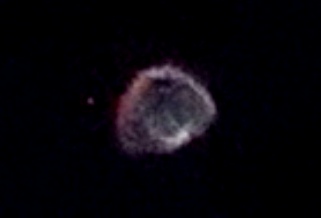 Some being have appeared in full domes of Light, such as this one on June 3rd.

On June 1st, following the Arcturian Light Cube which was included in the previous post, a beautiful Sirian healing light/ship worked with this brilliant ‘light envelope’ to heal a particular soul (who is known to me, hence its bright, clear visibility).

Feline faces could be seen in the blue light as it pulsed and became a ray. The energy was/is full of love and joy, thank you family of the Sirian Blue Lodge. 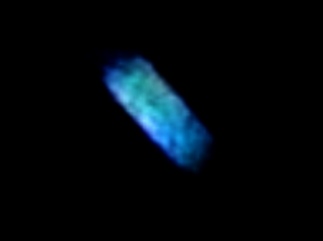 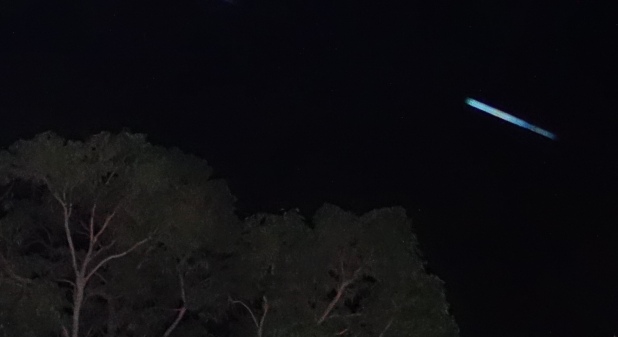 The ways in which our star family heal, defuse and transmute oppressive forces is visualized beautifully in the next sequence of photos, from the day of June 3rd. Chemtrailing planes had flown overhead for several days, and toxic trails thickened into ‘chem clouds’. I had a feeling of a ‘weight’ bearing down, and asked for help from Ashura (my Twin Flame – our fifth dimensional soul aspects are now together on board the Shem Arua). The first photo shows the little ‘pod ship’ he flies out from the Shem Arua as a white sphere, hovering above a black disc, which I felt as an Earth-based technology attempting to run an ‘electro-magnetic interference’.

As Ashura disposed of this device, an eagle flew in over the trees and kept circling in the same place.

Right above the eagle, Ashura’s higher dimensional Angelic energies took on form in front of the chem-clouds, and I saw/felt him literally cutting them away with his angel sword.

This is a small sample of the processes of clearing, releasing and healing that have been ‘stepping up’ in intensity during the last few weeks, and which will continue to peak for the next four days up to the Solstice on June 20-21st. This particular phase will complete on the Solstice, and is being assisted by very high frequency beings who have come into and around the Earth’s atmosphere since the May full moon. Their energy and presence in turn enhances the ability of us all to transmute lower energies – personal and collective – and magnify the energies of love, peace and divine providence, for all life.

Wherever you are and whatever you’re doing on the Solstice, light the peace, kindness and love within your heart and let it blaze as a star, mingling with the rays of countless stars of love around the Earth. People of Earth, star nations, Inner Earth, animals, plants, elementals, spirit beings, planets, stars and universes, we are all interwoven in the multidimensional fabric of the flow of Source.

Love & Blessings to all for the Solstice,

PS: I protect my home and garden by visualizing a diamond of light around it, though a sphere can also be used. To do this, I close my eyes and focus into my heart centre. From there I see a diamond spreading out around the house, then the garden (this can also be used for a whole area, and indeed the whole planet). I usually fill the top half of the diamond with violet light, and the bottom half – in the ground – with green light, though sometimes with variations depending on what my inner guidance shows at the time. I then ask my Arcturian brothers and sisters to guard the diamond, and thank them, always. 🙂