Disclosure of extraterrestrial presence around Earth is gaining momentum. I Know What I Saw, from director James Fox, is the latest documentary film to be released that assembles evidence from a range of witnesses, from civilian to military, and offers a good introduction of the subject to people who are as yet unaware or disbelieving of the reality of ETs.

From UFOTV: “Director James Fox brings together the testimony of Air Force generals, astronauts, military and commercial pilots, government and FAA officials from seven countries; their accounts reveal the reasons those involved at the highest levels have chosen government secrecy over public disclosure in I Know What I Saw.”

Dr. Edgar Mitchell, former Apollo astronaut, describes this film as “The most compelling film on the subject to date.”

If you don’t know of it, a focused action for formal government Disclosure is currently underway in the US, led by Steve Bassett of the Citizen Hearing on Disclosure. DVDs of witness testimonies given at the National Press Club in Washington DC in April/May 2013 have now been sent to every member of the US Congress, with the call for a congressional hearing on extraterrestrial presence on/around Earth. In the Disclosure movement, there’s a widely held view that if a congressional hearing takes place (the first in the US since 1968, on the topic of ETs) then the ‘truth veto’ will be impossible to maintain, and global Disclosure by governments will swiftly follow.

From Steve Bassett: “The evidence for an extraterrestrial presence engaging the human race is now massive, and polls show over half of the American people are convinced this presence is real. It is long past time for the U.S. Congress to hold comprehensive hearings and assert its investigative and oversight responsibilities.”

The Intergalactic Confederation has been sending emissaries to Earth’s governments since the 1950s, if not earlier, and as many of you know, if they had not been rejected we ‘d be living in a very different world right now. The galactics have upheld, and continue to uphold, the vibrational choices of humanity – while human and non-human powers behind governments strive to preserve plutocratic rule under the guise of democracy. Please know that in this situation, every bit of genuine disclosure, from all angles – official, civilian, large or seemingly tiny – helps. 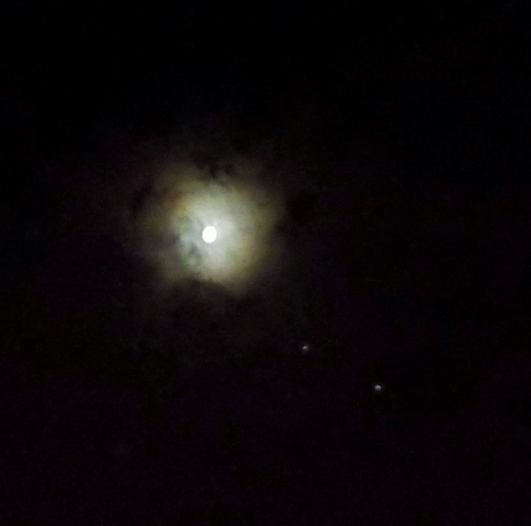 Photo I took on December 4, 2014, of two V-shaped ships of the Ashtar Command, which flew through the halo of the moon.

Every connection made with the loving beings watching over and assisting Earth’s evolutionary Shift establishes another conduit of light, and when I look around the higher dimensional heart grid of this planet, lights are ‘switching on’ all over it. Disclosure is the prelude to massive transformations and, despite extreme confusion at present about ‘who is who and what is what’, through a plethora of contradictory beliefs, it is happening.

Keep steady through this process. Listen to your heart’s inner voice, rather than be swayed by messages and stories that have been ‘interfered with’ by the 4D matrix. Whether looking at ‘hard facts’ or disinformation/hoaxes, channellings or research, whatever it is, the mind works in clarity when it is fully aligned with your inner heart, the seat of your soul ~ a peaceful heart is a clear light through which to see and feel.

We are experiencing a period of intensified light, and intensified resistance where old template energies have not yet been cleared, both of which express individually in our psyches and bodies, collectively in harsh events and increased levels of distraction and stress – and in movements for freedom, respect, compassion and equity. Love your Self and all beings,all Life, like never before, lift it further, and the veil of lower energies disappears. Then ‘disclosure’, on all levels, simply IS!

PS: Another facet of Disclosure is represented in the work of Robert Hastings, who for more than forty years has been researching the phenomenon of UFOs hovering over nuclear missile launch sites and storage facilities and deactivating weapons, around the world. He has interviewed over 150 former missile site technicians and personnel in the US, and is also seeking financial assistance from the public to complete an upcoming documentary about UFOs and nuclear weapons. The following interview with him is in English,  after an intro in Spanish:

The social media campaign to ensure the DVDs are reviewed by congressional staff is moving forward rapidly. The number of tweets and Facebook messages with hashtag #disclosure since Oct. 31 is over 600,000. The campaign is being run from three web site locations: www.faxonwashington.org, www.disclosure.media, The Disclosure Lobby (Facebook).