For those of you who don’t know about it, The Space Less Traveled, a biographical film about former Apollo astronaut Dr. Edgar Mitchell, sixth man to walk on the Moon, has been in production for a year. Its producers are seeking funding to complete the movie through the Kickstarter programme, and as the life-work of Dr. Mitchell – the raising of human consciousness and disclosure of extra-terrestrial presence on/around Earth – is close to my heart, I’m posting a link here where you can help support the film.

At 84, Mitchell remains a tireless, modest, courageous and insightful advocate for Disclosure, new energy, and the advancement of human consciousness. I look forward to watching the completed film!

The Space Less Traveled is a feature length documentary about Apollo 14 astronaut and sixth man on the moon, Edgar Mitchell, whose three day return flight to Earth in 1971 was a revelation, shaping the rest of his life. The Space Less Traveled shines a light on Ed’s ceaseless exploration since his return, focusing on his work as a scientist, philosopher, author, poet, and humanitarian. With unprecedented access, we’ve spent the last year filming Ed and his closest friends, colleagues, and family. This has culminated in numerous never before heard stories and insights. Ed’s pursuits in the areas of consciousness, healing, sustainability, cosmology, extraterrestrials, and the paranormal have made him an outsider to many, and an icon to others. Previously unknown information about Ed’s days in NASA are revealed, and serve as a launching pad for a lifetime of achievements, from Ed’s formation of The Institute of Noetic Sciences, to his current mission of harnessing zero point energy, and everything in between. The Space Less Traveled promises to be an enlightening, fun biopic about one man’s ceaseless exploration.

Follow the link, watch the trailer, and please share widely, as there are only four funding days left in the Kickstarter campaign.

I also have a petition for world ET Disclosure, addressed to the Secretary-General of the UN, here, if you would like to read and/or sign it.

Most of you reading this will know I’ve had contact with members of the Galactic Federation for several years, and have taken hundreds of photos of ships and our ET brothers and sisters. Here’s a photo I took in April, last year; the Moon is behind thin cloud on the left, and in the upper right of the frame there is a faint disc (small cloaked ship), with a ‘white light’ being descending directly beneath it. I’ll introduce this dear friend in more detail soon.  🙂 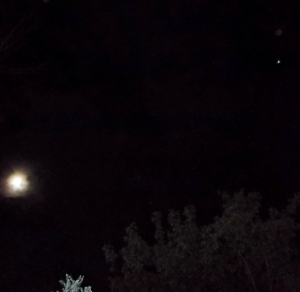 Close-up from the above photo.

Love to you all, dearhearts. Have a wonderful week, and stay in high heart energy! Namaste ❤