A friend and I were chatting recently about ‘connecting the dots’ of the Universe as our awareness expands. More and more people are experiencing conscious synchronicity, in thoughts, feelings, life events, meditations, dreams and so forth. Adding to that, as we become more deeply centered, heart-aligned with Source, our awareness not only connects dots, the ‘dots’ magically layer through and into each other in a merging that demonstrates what ‘multidimensionality’ IS.

When we focus wholly through our natural alignment to Source, with the mind still and heart open, the ‘dots’ coalesce to our inner vision, reflect through multiple dimensions, and merge into each other as One. Within those unifying moments, dimensional doors open. And through those doorways stream energies that match the vibration, focus and intent of what we are asking and offering (consciously and unconsciously) to the Universe.

The ‘unfolding’ of the beech grove’s energies, in the garden here, is a demonstration of the Flow at work, across dimensions. My connection with the beeches began before moving to this house, accompanied by visions of making a ‘sacred circle’ in the grove, with an emerald-green stone at its centre. The deep Heart energy of this place was tangible; Goddess energy (the Beech Queen) embracing the God energy in sacred balance, and that it was a place of healing, a sanctuary. I also learned of Beech energy in the ancient world being associated with crossing thresholds, opening doors, bringing old knowledge into the present, aligned with the scribe god and goddess, Thoth and Seshat, Lord and Lady of Karma (meaning they went beyond the cycle of rebirth). who I work with in this life as Ashtar and Sesherat of the Intergalactic Confederation fleet.

Beech grove in the new garden

They guided me to research the name of one of my soul aspects (a Venusian incarnation). With this came dreams of that lifetime, coming to Earth….and departing from Earth. The dreams took me back to a recurring childhood dream of Lake Titicaca, and an ancient city there, deep down (an Agarthan city in 5D). I will not go into this too much here, but if you’re interested, watch the video at this link, for the discovery of an ancient pre-Incan city and temple complex underwater in Lake Titicaca (the highest navigable lake in the world, between Peru and Bolivia):

Lake Titicaca has the shape of a puma chasing a rabbit, and the Sun God Viracocha, in Incan and pre-Incan myths, was said to be ‘born’ on the Isle of the Sun.

In the past few weeks, my dreams have also gone to Puma Punku, ‘Door of the Puma’. I saw a platform having four great pillars of crystal on a slab of an emerald-green stone, via which people could teleport. This was a Lions’ Gate, an ancient stargate built by the leonine people high in the mountains, near a temple city. On reading last year (in Drunvalo Melchizedek’s The Ancient Secret of the Flower of Life) that Thoth and Seshat had a child in Peru, I had a memory of them leaving the Earth from Peru and returning to Venus, for a time. Seshat/Sesherat is of the leonine race called Paschat (Seshat is a human rendering of that word) and the technology of the Puma Punku is of the leonine people.

Here in the beech grove, first we would ‘reset’ the foundation, or base, energies of the land, and activate its heart energy with Gaia’s core, using the geometry of the ‘four-petalled Rose’.* 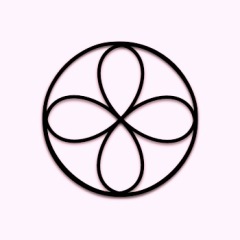 This is represented by a tetracross: a double Infinity symbol of four ‘petals’ inside a circle, akin to the four-petalled flower of the base chakra, aligned to the cardinal points, with a beautiful piece of emerald in the centre (with yin/water energy, sent by a dear soul sister, from the Colorado River). To the east and west of the emerald are two quartz ‘pillars’, with malachite at north and south (heart protection), and jade and peridot bringing in the fullness of the ‘green’ spectrum. Here is the circle, and a close-up of its centre:

The outer circle contains 80 gumnuts (seed pods of gum trees) placed upright. As you can see, they are like tiny cups, and represent the Cup/Grail/yin/receiving energy of the circle, and were laid down at Full Moon. While making the circle, Orbs began to arrive in the grove. I had never seen their like before, with pieces missing or holes in them,  arriving for healing and assistance (Orbs being representations of a Soul’s energies; whether that Soul is in physical incarnation or not). For a general practice to help such Souls with healing/rebalancing, see the previous post about Purple Flame. The Orb pictured below arrived a few nights ago, with a large hole in it, assisted into the grove by two small Orbs:

The next element in the circle’s ‘geometry’ was a cross of yellow-gold stones running across/inside the four petals, on the date 14-2-14 (or 2-14-14 to friends in the USA). Literally, the 1’s are present (doubled, 2×1) in the cross, which also represents 4 arms within 4 petals, so we have the 1s and the 4s of the 14, doubled. 4 doubles to 8, and the petals also form 2×8, or 2 Infinity symbols, crossing over in the centre, with 2×1 (the crossbars) inside them…the Cross raising the Base (4) to Infinity (8). The 1s and 8s create the number 18, doubled in the tetracross/four-petalled Rose. 18 in Hebrew is ‘chai’, meaning ‘Life’ or ‘alive’. 18 doubles to 36. 36 doubles to 72. 72 doubles to 144, through the power of Infinity to 144 000. The 80 ‘Cups’ hold the vibration of 8 (Infinity) of the Circle (O=Heaven) being anchored into the Base, while the cross lifts the Base into a ‘new’ energy: simultaneous ‘descension’ of ‘heaven’ and ‘ascension’ of Base, manifesting the INception energy of the Shift. The tetracross or rose cross with the two crossbars is connected to the energy of my Twin Flame and I; hence we were both born into physical on the 18th day of a month. So the sacred circle represents our energies grounded in union, as One, with Gaia.

3D physical is constantly reflecting; here in the ‘gifts’ that appeared in the circle the next day – feathers in the green ‘frequency’, from yellow-green to aqua, left in the circle by a visiting family of parrots:

Can you feel the interweaving of the dimensions there? The Flow, or dance, between the macrocosm and the microcosm? ‘As above, so below, through the centre is the flow’.

The sacred circle in the beech grove will continue to evolve. Its present form is given to establish a Base of elevated frequencies; its healing qualities are now activated, and star family show its potential as a mini star portal/doorway coming into alignment, through several stages….according to particular planetary alignments. Members of the fleet have semi-materialized over several days/nights in the grove (not in their unveiled light-forms, as the neighbour’s house is very close by, so their appearance is muted, just visible). In the photo below, you may be able to see, to the right of the circle, Ashtar’s head, shoulders and upper chest in a light-coloured material, with a darker sash (purple, as I ‘see’ it) running from his right shoulder (right, if you’re looking at the picture) down over his chest. A friend observed that he appeared to be sitting in lotus position. The first photo shows the grove empty, and the second photo with him slightly materialized:

The grove, empty except for one tiny orb at the right. Petals of circle visible left of centre. (Feb 15, 2014)

The following night, four figures were visible, but very faint in photos. There have been many more since then, which I’ll speak of in later posts.

For a view of current constructions of teleportals using sacred geometry and crystals, see the video below by Sandra Walter:

What we are constructing in the grove here is on a tiny scale, and I wish to add that higher dimensional beings/people can represent their energies visibly and tangibly without the use of ‘technologies’ as we understand them. In a sense, the torus in every atom in our bodies, and every subtle ion of our beings, is a ‘portal’, as are stars, at the large scale, and indeed galaxies. Everything reflects and connects.

Keep dreaming, visioning and creating in Joy, my friends! Love to you all.

* About the soul aspect name I’ve researched, ‘Hanamaya’; ‘Hana’ translates as ‘flower’ from Japanese and Persian, ‘Grace (of God)’ in Hebrew, ‘divine’ or ‘radiant’ in Maori, etc. ‘Maya’ relates to the Mayan people, and also to the Sanskrit root word ‘maya’, which is commonly used to mean ‘illusion’, as in the illusion of matter. In the oldest texts, however, the Rig Veda, it meant ‘power’, specifically power of the ‘gods’….before duality distorted the energies/meanings. But that is another story. Both the four-petalled Rose and the shells used to form it in this circle relate to the energies of Venus, and Hanamaya, ‘Divine Flower Power’. While looking into the vibrations of this name, the video below came to my attention….about the recent discovery of the Hummingbird Pyramid in Ecuador. Glyphic text on its walls has been deciphered as *paleo-Sanskrit* in origin! 🙂